If you have followed the recent breaking news and social media trends, you might have already heard of the three Farm Bills, a set of agricultural reforms passed by the Government of India (GoI) in September 2020.

Though the bills aim to transform the agriculture sector and raise farmers’ income, they are facing a massive backlash from opposition parties and farmers’ groups across the country, especially in Haryana and Punjab.

Farmers have taken to the streets, protesting against the three agriculture reforms- Farmers’ Produce Trade and Commerce Act 2020, Farmers Agreement on Price Assurance and Farm Services Act 2020, and the Essential Commodities (Amendment) Act 2020. 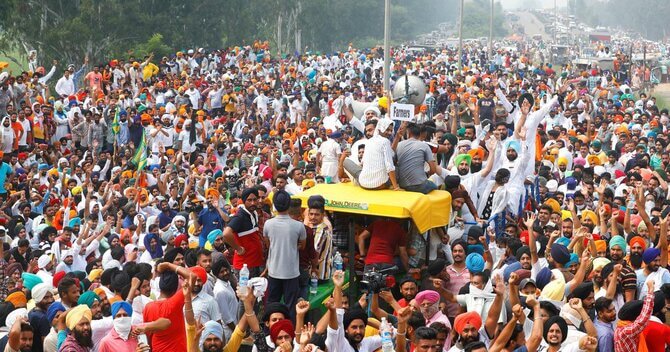 But very few of us know exactly why these new Farm Bills were introduced and why farmers are staging protests. Here’s a primer or an explainer on the contentious Farm Bills.

The Farm Bill / Farmers Bill 2020 is a combination of three bills enacted by the Modi Government with an aim to introduce reforms in the agricultural sector.

The three bills are: 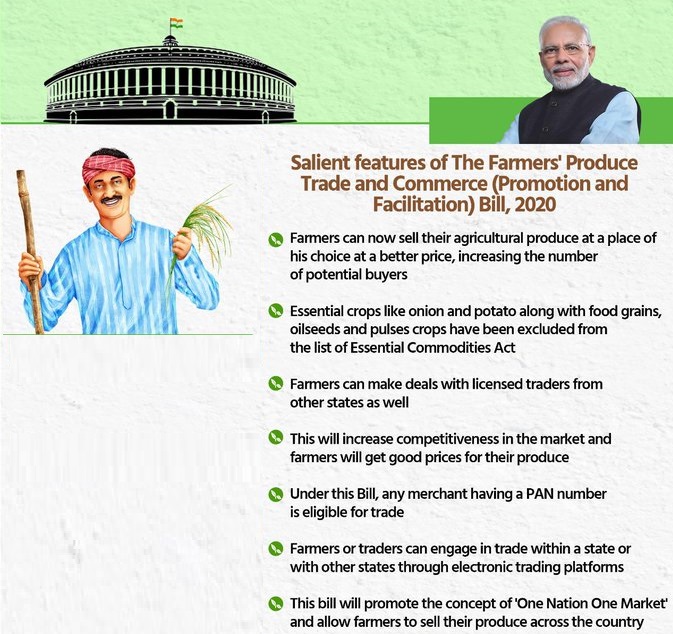 As per the Agricultural Produce Market Committee (APMC) Act, the farmers in India are restricted to sell their agricultural produce only to the state-owned ‘Mandis.‘ Commission Agents (CAs) mediate between the farmers and traders to process the sales.

Farmers are not allowed to sell the produce outside the mandis. Even the trade of agricultural produce between various states is restricted.

The new law gives the farmers and traders the freedom of choice of sale and purchase of agricultural produce. It also promotes barrier-free trade of agri-produce outside the physical premises of mandis.

Basically, the reform aims at creating additional trading opportunities outside mandis to help farmers get remunerative prices due to additional competition.

Other benefits of the bill:

Small and marginal farmers who operate with just a few acres of land make up over 80 percent of the agrarian population. They lack the mechanization and efficiencies of scale common in developed economies.

Moreover, the Indian agricultural sector has specific inevitable weaknesses such as weather dependence, production uncertainties, and market unpredictability. All these make agriculture risky and inefficient.

The new law aims to empower farmers to engage with agribusiness firms, processors, wholesalers, aggregators, large retailers, and exporters, with an agreement of price assurance even before sowing crops.

This will transfer the market unpredictability risk from the farmer to the private corporations or sponsors.

Other benefits of the bill:

The Essential Commodities Act, 1995 gives the government power to regulate the production, supply, and distribution of essential commodities and impose a stock limit to prevent hoarding and black marketing. While the Act’s purpose was initially to check illegal trade practices, lately, it has become a hurdle for investment in cold storage, warehouses, processing, and export.

The Act has dampened the entrepreneurial spirit to invest in cold chains and storage facilities for many essential commodities, especially perishable goods, as they could attract sudden stock limits. The Essential Commodities (Amendment) Bill, 2020 seeks to address such concerns.

However, the amendment gives the government the right to regulate such commodities in extraordinary situations such as war, famine, steep price rise, and natural calamity. The imposition of stock limits will be based on the price trigger.

Other benefits of the amendment: 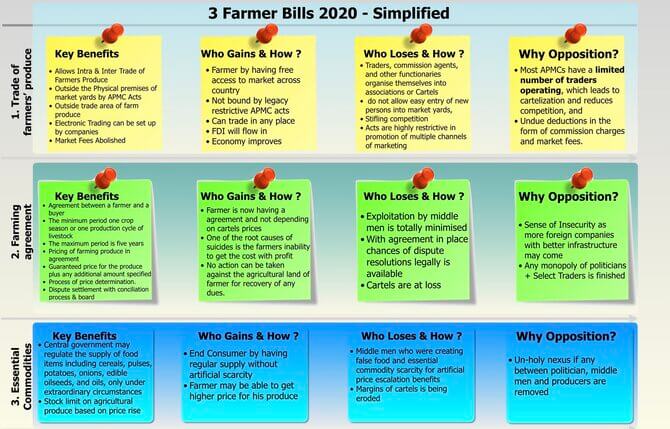 As per Modi’s government, the new Farm Bills aim to benefit marginal farmers, who make up 80 percent of Indian agriculture.

Agritech startups, agri warehouses, and private players in the food trade are some other prominent beneficiaries.

Several farmer unions and opposition political parties across India began holding protests soon after the Central Government enacted the three farm bills. After two months of protests, they started a movement called ‘Dilli Chalo,’ in which tens of thousands of farmers marched towards the Indian capital.

Their campaign has found resonance on social media and won tremendous public sympathy across the world.

Here are the states that witnessed severe protests:

One of the major concerns that led to the uproar throughout the country is the unconstitutional way the bills were enacted.

The Centre has by-passed the federal structure by legislating on subjects that exclusively fall within the state government’s domain.

The Modi Government should have included the opposition parties and considered farmers’ voices to address the loopholes in the bills.

The Centre has not only passed the bills quickly without referral to a parliamentary panel, but they did so when the country is reeling under the pandemic, with most people busy with personal issues. This has triggered an air of mistrust between the ruling, opposition, and the farmers. 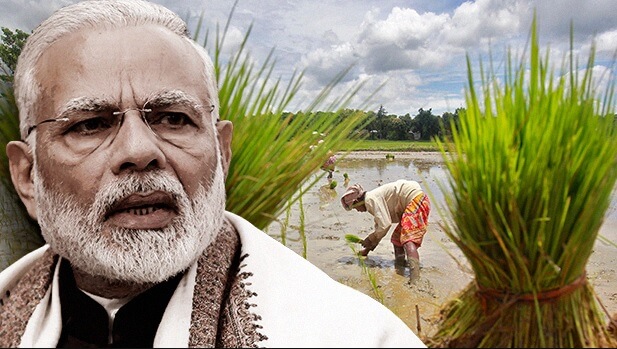 So far, PM Narendra Modi and his government have taken a stance against the protests, claiming that the new bills will provide farmers more autonomy, enable better marketing, and remove regulatory hurdles.

To some extent, the Centre has a point. For decades, economists have stressed the need for reforms in India’s obsolete agriculture sector, where intermediaries control prices, stagnate supply chains, and contribute to food wastage. And small farmers, who make up most of the agrarian population, cannot afford the mechanization and efficiencies of scale common.

However, Narendra Modi has pulled off another big, bold decision with little emphasis on democratic decision-making.

In 2016, he declared sudden demonetization of INR 500 and INR 1,000 banknotes, creating significant disruption throughout the economy. Last year, the revocation of Kashmir’s special status caught the country by surprise. And in July 2020, Modi’s government approved the National Education Policy 2020 (NEP 2020), which looks promising only through a birds-eye view. However, none of these contentious decisions ended up harming Modi’s reputation.

Will the ongoing farmers’ protests present a severe challenge to Modi? It’s hard to say.

What is your opinion on Farm Bill 2020? Please share with us!