‘Sambhar Lake’ in Rajasthan reportedly had more than 1000 birds of different species lying dead along its shore.

This was first spotted by the tourists visiting the lake on November 10, 2019.

“We are still counting the dead birds. They are strewn over the entire area around the lake. Some 20 to 25 birds who were still alive are being treated,” said a senior forest official Sanjay Kaushik.

Shocked at the incident, Abhinav Vaishnav, a local birdwatcher, told PTI that they “have never seen anything like this”.

According to Vikas Choudhary, photographer at Down To Earth magazine, dead birds were lying along 12-15 km area around the lake.

“I am sure the numbers will rise further and may even touch 5,000 birds. There are just so many dead birds lying all over the place,” says Vikas. 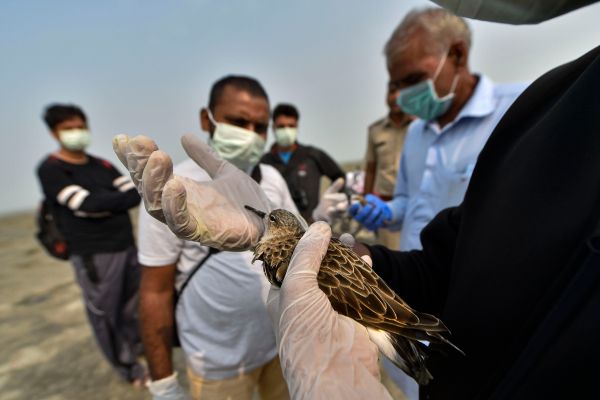 Some other birds were sent to Bhopal for further laboratory tests and the government agencies have begun investigating the matter.

Forest officials suspect this could be the result of hailstorm that hit the region few days ago.

“We are also looking at other possibilities, like toxicity of the water and bacterial or viral infection,” the official adds.

The number of affected bird species has also increased to 28 from the initial number of 10.

Volunteers from local NGOs, Wildlife Creatures Organisation and a few veterinary professionals could rescue some birds.

“We have administered medicine to reduce stress, and antihistamines, and antibiotics for now in case there’s an infection viral or bacterial,” Ashok Rao, a veterinary doctor, said.

What Could be The Reason?

“The deaths could also be due to overconsumption of salt. However, we’ll be able to confirm the exact reason once we have the results,” says Chief Conservator of Forest Arun Prasad.

On bird-flu concerns, he said, “We are ruling out bird flu, there is no secretion in the birds, no laceration either. Also, bird flu usually affects 80 per cent of the bird population and becomes an epidemic, which is not the case here.”

The forest teams combing in the area confirmed the toll as 1500 and another 2,338 birds were reportedly buried already. They have so far covered 3 km of the area and are left with another 12 km.