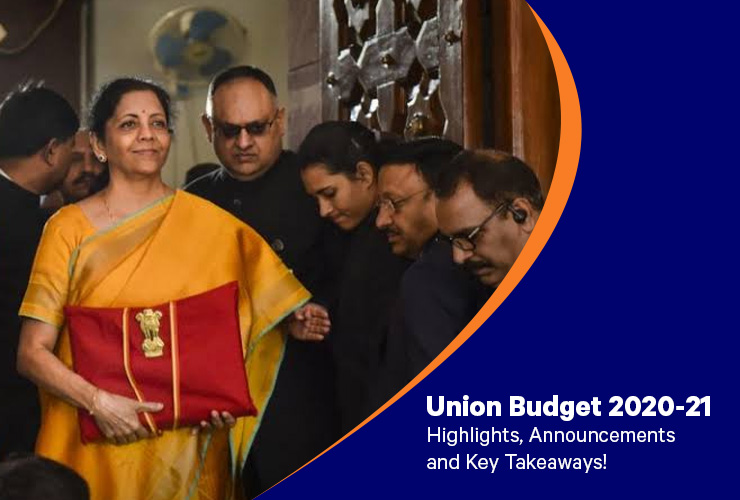 Amid the concerns over continuing economic slowdown that saw remarks from the international experts, the Government of India presented its Union Budget FY 2020-21 on February 01, 2020.

The USD 428 billion budget for FY 2020-21 is the second one under the Narendra Modi Government at the Center. 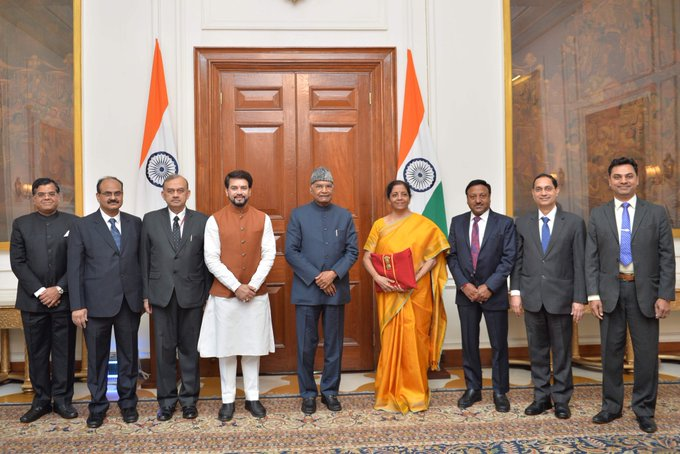 Let’s take a look at some key highlights from the India Union Budget 2020-21: 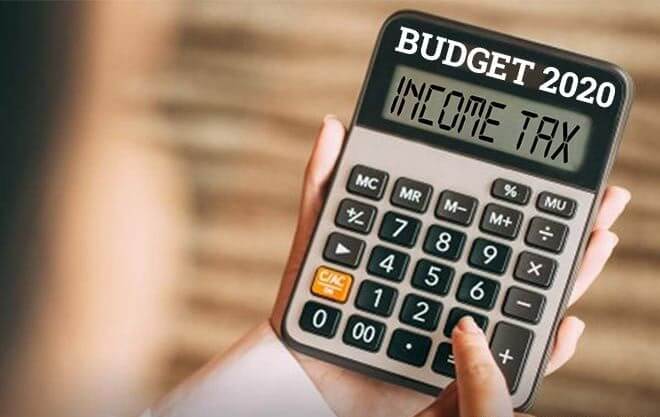 This time, the government gave some relaxation to the individual taxpayers in the tax regime.

Under the new tax regime:

The Finance Minister said individual taxpayers can get substantial benefits under the personal new tax regime.

Moreover, 100% tax exemption has been offered to the Sovereign Wealth Funds’ Indra Investment. Whereas, municipal bonds have been offered concessional 5% withholding tax.

Now, companies will not be required to pay Dividend Distribution Tax (DDT). The Finance Minister called the new tax regime as the lowest, simplest and smoothest. 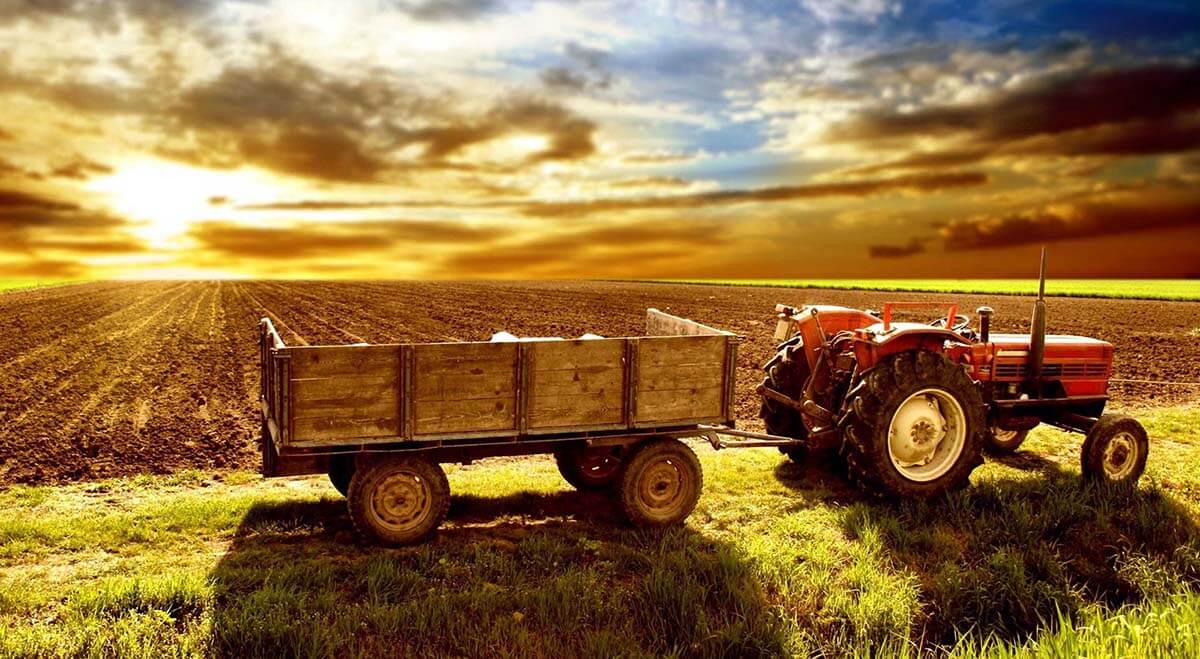 With a due emphasis on agriculture sector, the new budget proposed a 16-point action plan for agriculture development and farmer welfare by way of doubling their income by 2022.

The budget promised 20 lakh farmers of giving all the needed financial support for setting up standalone solar pumps. Now, farmers can set up solar units on barren and fallow lands and ensure power to grid. 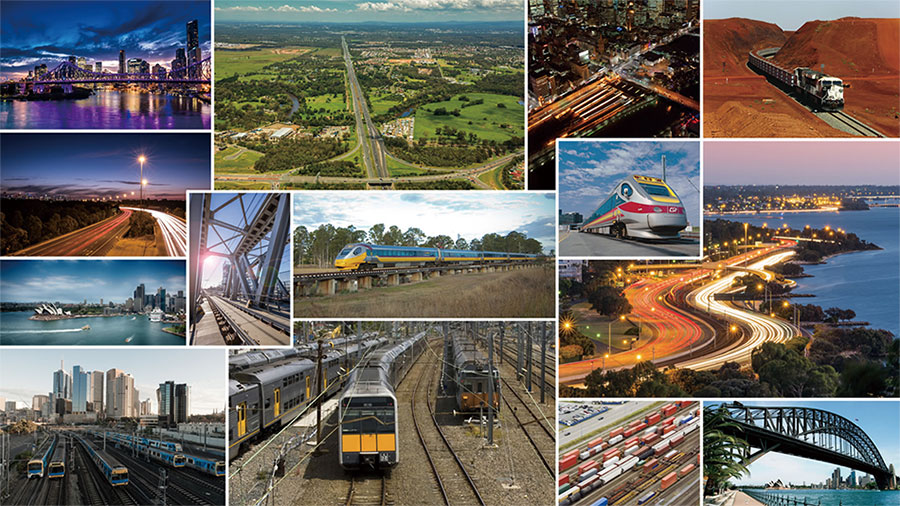 A total of Rs.1.7 lakh crore has been allocated for transport infrastructure.

Under the UDAN scheme, the government is planning to develop 100 additional airports across the country by 2024.

Around 6000-km of road highways will be monetized in 12 lots by 2024. At least one major part of the country is expected to be privatized.

A total of Rs. 100 lakh crore has been planned for infrastructure development over the next five years and more than 6,500 projects under various sectors will be categorized by size and progress level. Around Rs. 103 lakh crore worth projects were already launched in December 2019.

Besides, the government will soon release the National Logistics Policy and is also planning the creation of the e-logistics market.

With an aim to connect tourist centers, the government plans to introduce more Tejas like trains.

A total of Rs. 18,600 crore will be dedicated for the Bengaluru Suburban Transportation project. 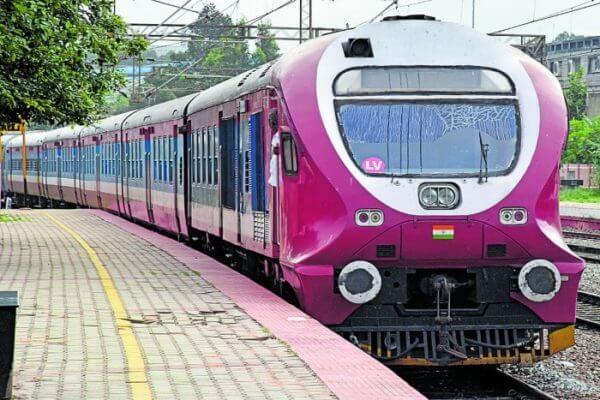 The government is also planning to boost digital connectivity across all public institutions, and around 1 lakh gram panchayats will be connected under ‘BharatNet’ program. The BharatNet program has been allocated a Rs. 6,000 crore budget.

Besides, the government is planning to develop 2500 access control highway, 9000-km eco-development corridors, 200 coastal and port roads and 2000-km wide strategic highways, alongside the ongoing Delhi-Mumbai express highway and 2 other corridors. 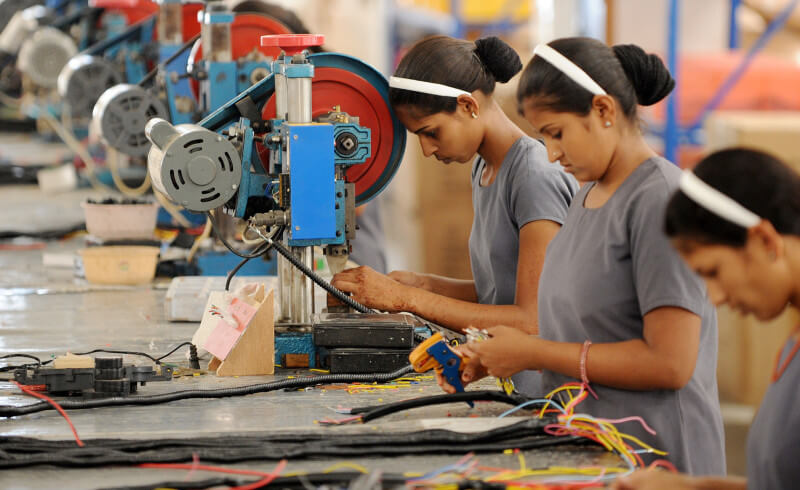 Under the private sector policy, various Data Center Parks will be set up across the country.

Towards improving electronics productivity, the government will introduce schemes encouraging mobile manufacturing, electronic equipment and semiconductor packaging, among others.

A total of Rs. 80 billion has been allocated for quantum technologies and applications over the next five years.

Milk processing capacity is expected to be doubled by 2025.

A total of USD 1 trillion has been allocated for food subsidies in the new fiscal year, followed by
Rs. 713.09 billion subsidy for fertilizers and Rs. 409.15 billion for petroleum. 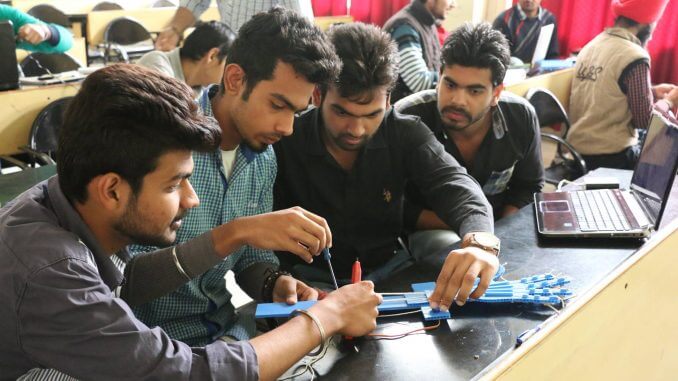 With youth on emphasis, the Finance Minister announced a Rs. 3,000 crore budget for skill development among youth across various sectors.

“There is a huge demand for teachers, paramedical staff and caregiveRs.in foreign countries. However, their skills do not match in accordance to demand by employers. So, my government proposes Rs. 3,000 crore for skill development,” Sitharaman said in her budget speech. 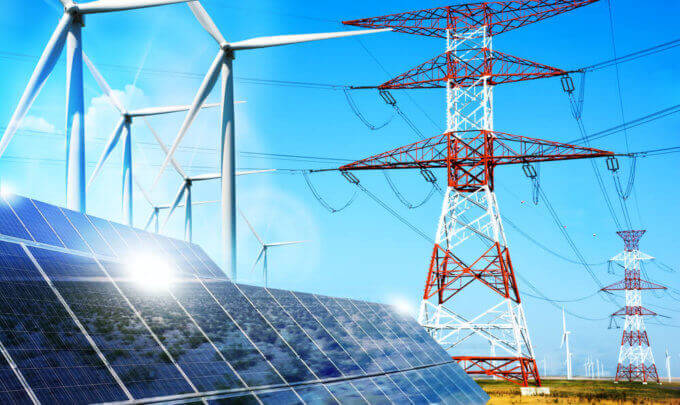 The Finance Minister announced Rs. 22,000 crore for power and renewable energy sectors.in the new fiscal. In the next three years, all states will have to replace conventional power meters with the prepaid smart meters in three years. Thus, the government intends to give freedom to consumers to pay just for what they use.

The government has allocated Rs. 273 billion for the promotion of industry and commerce within the power-power sector cooperation.

Firms operating old thermal plants will be required to shut their plants if emission levels fail to meet the set norms.

7) For a Clean Environment 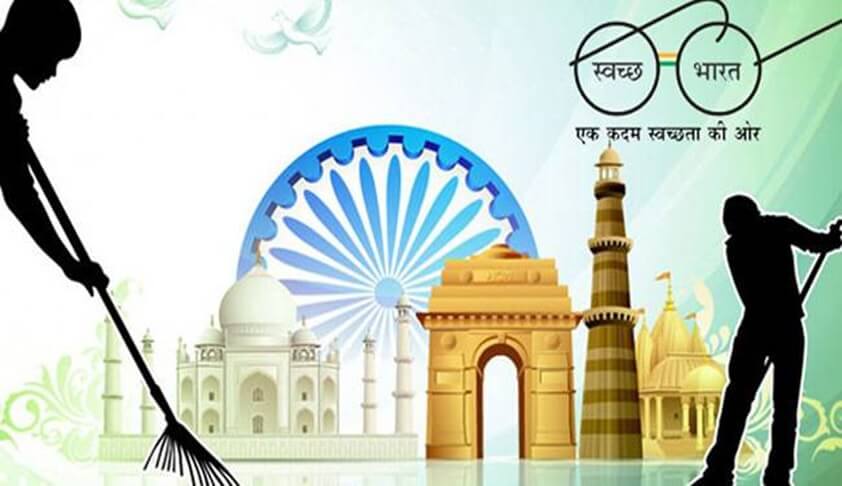 The new budget has allocated Rs. 12,300 crore for the Swachh Bharat mission in the new fiscal.

As an extension under the Mission, the government also stays committed to Open Defecation Free (ODF) Plus, a program for effective management of biodegradable waste.

“Committed to ODF plus in order to sustain ODF behavior and to ensure no one is left behind,” says the Finance Minister.

For clean air across cities, the government has allocated Rs. 4,400 crore for Clean Air initiative across states with Rs. 44 billion for cities with 1 million population.

Any power plant with emissions beyond the permissible limits will be shut down.

The Government of India’s commitment to meeting the promises made at the Paris Climate Accord will begin on January 1, 2021. 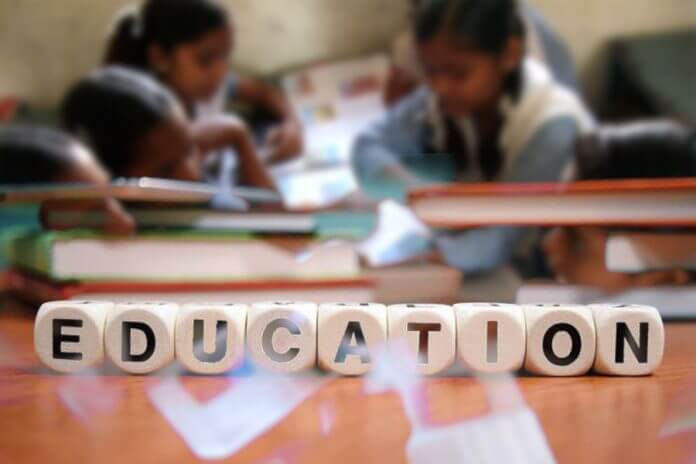 A total of Rs. 99,300 crore has been allocated for education sector in the new budget, along with another Rs. 3,000 crore for the skill development program.

Urban local bodies across the nation will provide internship opportunities for young engineers for a year period.

Moreover, external commercial borrowings and FDI will be utilized to boost the country’s education system.

Under the ‘Study in India’ initiative, 150 higher education institutions will be prepared to offer apprenticeship diplomas by March 2021.

“By 2030, India will have largest working age population in the world. This population needs both job and life skills. New education policy to be announced soon,” says Sitharaman. 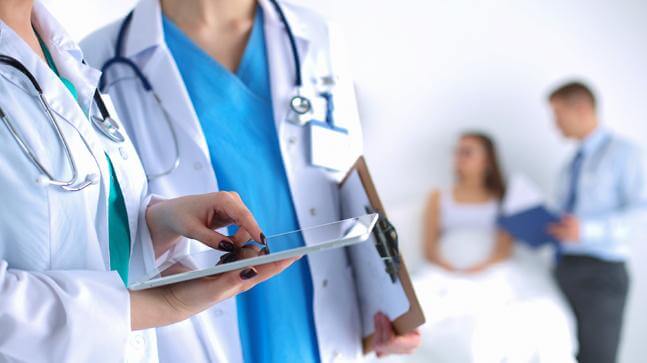 Of the total allocation for health, Rs. 6,400 crore will be utilized for the Ayushman Bharat Yojna program.

The Ayushman Bharat scheme envisages to provide a health insurance coverage of up to Rs.5 lakh per family and cover around 10 crore poor and vulnerable families.

To improve the healthcare, the government announced the linking of a medical college with existing district hospitals. 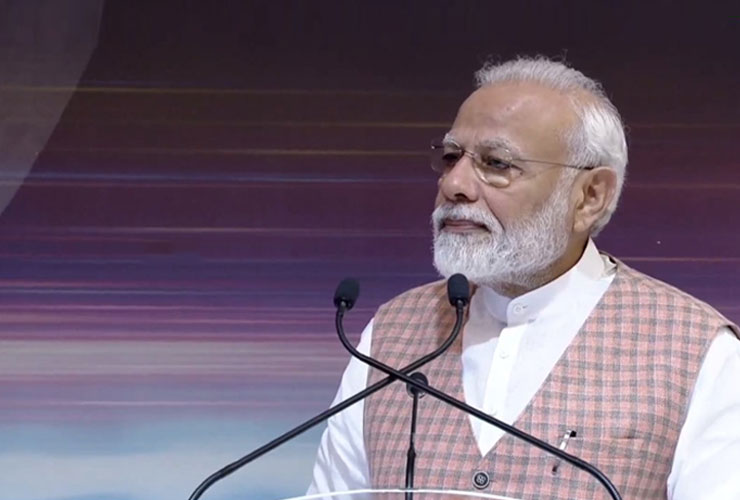 PM Narendra Modi called the new budget a vision and action-oriented one!

“The new reforms announced in the Budget not only give a boost to the economy but also aim at the economic empowerment of every citizen in the country. This budget also works towards further strengthening the economy in the new decade,” the PM said in a media briefing post the budget release.

“The 16 Action Points will help in doubling the farmers Income along with increasing the employment generation in the Rural Sector. The Union Budget adopts an integrated approach for the Agriculture sector, where the focus apart from Traditional means of cultivation is also on increasing the value addition in horticulture, fisheries and animal husbandry and this in turn would increase employment. The efforts in blue economy would bring about more employment to the youth in fish processing and marketing”.

“There was a decision on the new machines in the technical textiles. Budget also announced the reforms in the raw material duty structure so as to increase the production of man-made fiber in India. There was a demand for this reform for the last 3 decades.”

“We have taken several policy initiatives with regard to Smart Cities, Electronic Manufacturing, Data Centre Parks, Bio-Technology and Quantum Technology. With this India would become an integral part of the global value chain. Budget focuses skill development of the youth through new and innovative initiatives like apprenticeship in Degree Courses, Internship in Local Bodies and online degree courses.”

“Over Rs. 100 lakh crore is being invested in over 6,500 projects and this would create a massive employment generation potential. The national logistics policy would also aid in trade, industry and employment. The announcement to develop 100 new airports would give a boost to tourism in the country and along with a huge potential for employment generation.”

“Several steps have been taken to strengthen the bond market and long-term financing of infrastructure projects. Similarly, with the abolition of Dividend Distribution Tax, companies would be having over Rs. 25,000 crore for further investment. Also, to attract FDI many tax concessions were announced. Similarly, tax benefits were provided to start ups and the real estate sector too.”

“Even small mistakes were considered criminal in the Company Law, now we have taken a major decision to de-criminalize such acts. We are launching the Taxpayer Charter, which would list out the rights of the taxpayers. Earlier this limit was up to Rs. 1 crore, but now it has been increased to Rs. 5 crore.”

“As of now the youth in the country have to take different exams for different government jobs. Bringing about a systemic change in this, the National Recruitment Agency will now hold one online common exam for recruitment to various jobs either for banks, railways or any other government job.”

“The Budget has announced linking of Anganwadis, Schools, Wellness Centers and Police Stations in over 1 lakh gram panchayats through Broadband Internet. This would help in Ease of Doing & Ease of Living. This would connect several remote villages also through broadband.”