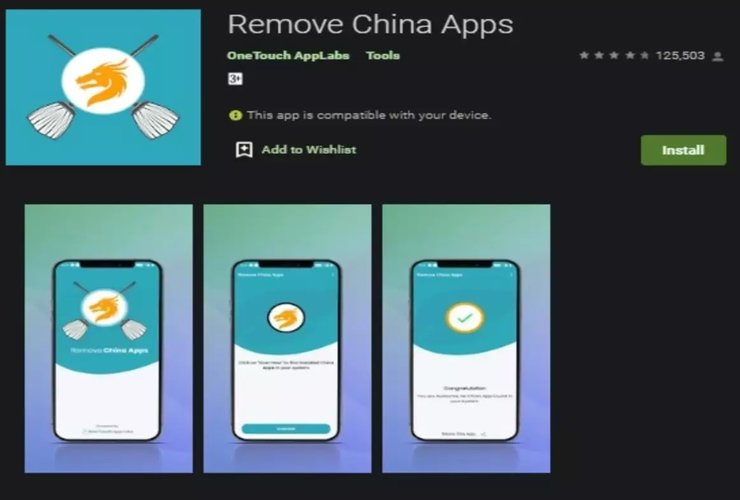 Anti-China protests in India have been on the full swing since the Covid-19 outbreak.

The recent border clashes added fuel to the fire, intensifying the anti-China sentiment further among Indians.

This deepened further calling for a strict ban on Chinese products, technologies, and more.

One trending move in that direction is the rise of the ‘Remove China Apps’ mobile application.

Upon installation, this app scans for applications of Chinese origin and removes them.

Developed by OneTouch App Labs, a self-claimed Indian startup, this app has crossed 1 million downloads within 10 days of its launch.

The app has reportedly gained traction in Australia. But the majority of the app installs happened from India, taking the app to top 5 in the overall Android tool apps list.

The app has garnered a 4.9 rating on Google App Store with nearly 18,000 reviews.

It detects the related apps by the country origin and leaves the option to delete to the phone user.

With a sudden rise to fame, the app’s background remains skeptical. It is backed by a simple WordPress site, and the company claims of having more than 8 years of experience in mobile, web and app design.

It’s also unclear and doubtful about how the app decides something as ‘China apps’ in specific.

Some of the app users have raised the following doubts :

Will the app flag apps developed by overseas Chinese?

What if the scanned app is a Chinese subsidiary with a fully localized team abroad?

In one such instance, the app has also flagged Zoom, a popular US-based video conferencing app, developed by a China-born US citizen Eric Yuan.

‘Will it be a Chinese app because it has a China-born founder?’ question the users.

Without disclosing its methodology for scanning Chinese apps, the app clarifies every information it tracks from a user, including device information, app versions, and version code.

The app has triggered an intense debate among the Chinese app developer community targeting overseas markets. They have decided to report about the ‘Remove China Apps’ app to Google.

“I think what happens in India will happen in other countries in the future, so this is a long-term impact that should factor into Chinese developers’ calculation,” says one of the significant app exporter.

While a few are confident that there is no near-time replacement for many Chinese apps.