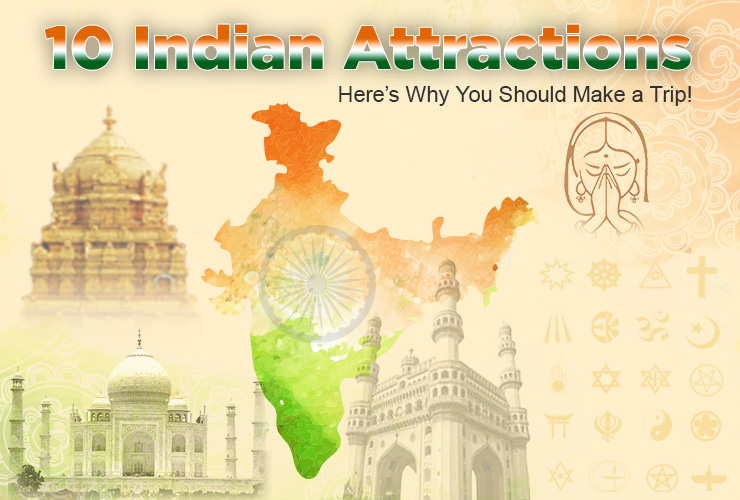 India – the land of different cultures has a lot to offer tourists than just populated cities and length traffic jams. A trip to India will leave one filled with rich memories to take home.

There are places and sites untouched by the noise, chaos, poverty and population that many people use to identify India with.

India can leave a lasting impact on your heart and mind and will beckon you to keep coming back to its many attractions.

Here are 15 reasons why should plan a trip to India:

Indians believe in the concept of Atiti Devo Bhava, meaning ‘the Guest is Equal to God’. When tourists visit India, they are drawn to the warmth and friendliness within every Indian. The local people, especially in rural areas radiate kindness and treat their guests with utmost care and respect. So don’t miss the opportunity when you’re invited to be a part of local culture and cuisine.

With a history spanning, the British, Moghuls and a multitude of famous Kings and kingdoms, India is a treasure trove for history lovers and knowledge-seekers. A number of heritage sites including Charminar, Red Fort, Humayun’s Tomb, Amer Fort and more tell the tale of ancient India, despite years of urbanization and modernization.

India is the birthplace of four of the world’s major religions and its people practice more than seven religions including Hinduism, Christianity, Islam, Buddhism, Jainism and Sikhism. There is a certain serenity and peace to observe Indians practice their daily religious rituals. And what is all the more surprising is to watch these people co-exist peacefully despite their striking religious differences.

Moreover, Indian’s deep respect for religion and spirituality is visible in the multitude of temples built over the years. Some of them are reminiscent of ancient India and are of deep religious significance to devotees till date. Some Indian temples that tourists can visit include Lord Jagannath, Somnath Temple, Mahabodhi Gaya, Venkateshwara Tirupati Balaji, Kashi Vishwanath and Mennakshi Annam.

With so many religions existing together on one land, it is no surprise to find an endless list of festivals being celebrated across India. Some of the most popular Indian festivals include Holi, Diwali, Dussehra, Eid and Christmas. India’s beauty is reflected in these festivals wherein, people participate with much fervor. Dressed in colorful clothing, observing festive rituals, cooking traditional cuisine and spending time with communities and families, Indians will show you how to celebrate.

You name it and India has it. With staple food including rice, wheat and grains, India’s cuisine will leave you wanting more. Some famous delicacies to try when you visit India include Chole Bhature, Pav Bhaji, Wada Pav, Biryani and an endless list of state specialties. As you travel the length and breadth of India, you will be surprised to find a specialty in every nook and corner of the country. Note for you: We Indians love spicy food!

6) Heritage Sites and their Architecture

India’s rich treasury of palaces, forts, ministerial buildings, monuments and ruins speak for the varied craftsmanship and artwork of the different eras in India. Each monument reflects the style of architecture from India’s golden history. While the Taj Mahal speaks of the Moghul’s architecture, the palaces in Jaipur speak of the craftsmanship of the Rajput architects and artists, the ruins of Hampi still give tourists a glimpse of what ancient city of Hampi looked like. There’s more for tourists who visit India, especially that the country is home to 32 UNESCO World Heritage Sites.

India boasts of a multitude of hill stations ranging from north to south and east to west. To name a few, India has Shimla, Dehradun, Darjeeling, Manali in the north and Ooty and Coorg in the south among others. Besides, getting to be part of the greenery and pure mountain air, tourists can also indulge in some adventures such as trekking and hiking.

This is one rare thing that you would have barely heard of but yes this is also part of India’s tourism offering. Heritage trains or Royal trains representing the lives of Kings and Queens in their cabins is definitely a treat to tourists and visitors. The Golden Chariot, Royal Rajasthan on Wheels, The Deccan Odyssey and Maharajas Express are some of the Heritage trains that run through royal Indian cities such as Jaipur, Udaipur and Jaisalmer.

Outside the noise of the city, there is the silence of the beach and you’ll find plenty of them in India. With breathtaking sceneries to take in and the soothing sound of the waters, Indian beaches such as Agonda, Radhanagar, Puri, Elephanta, Yarada, Dhanushkodi and Muzhappilangad Drive in present the perfect haven for nature lovers and those searching for a peaceful retreat.

Do you still have an image of chaotic and overly-populated India? It’s time to rethink and make a visit!

Stay tuned to us for more interesting Indian culture news articles. Catch us on Social Media across Facebook, Twitter,Instagram and Youtube for today’s latest news updates from India.